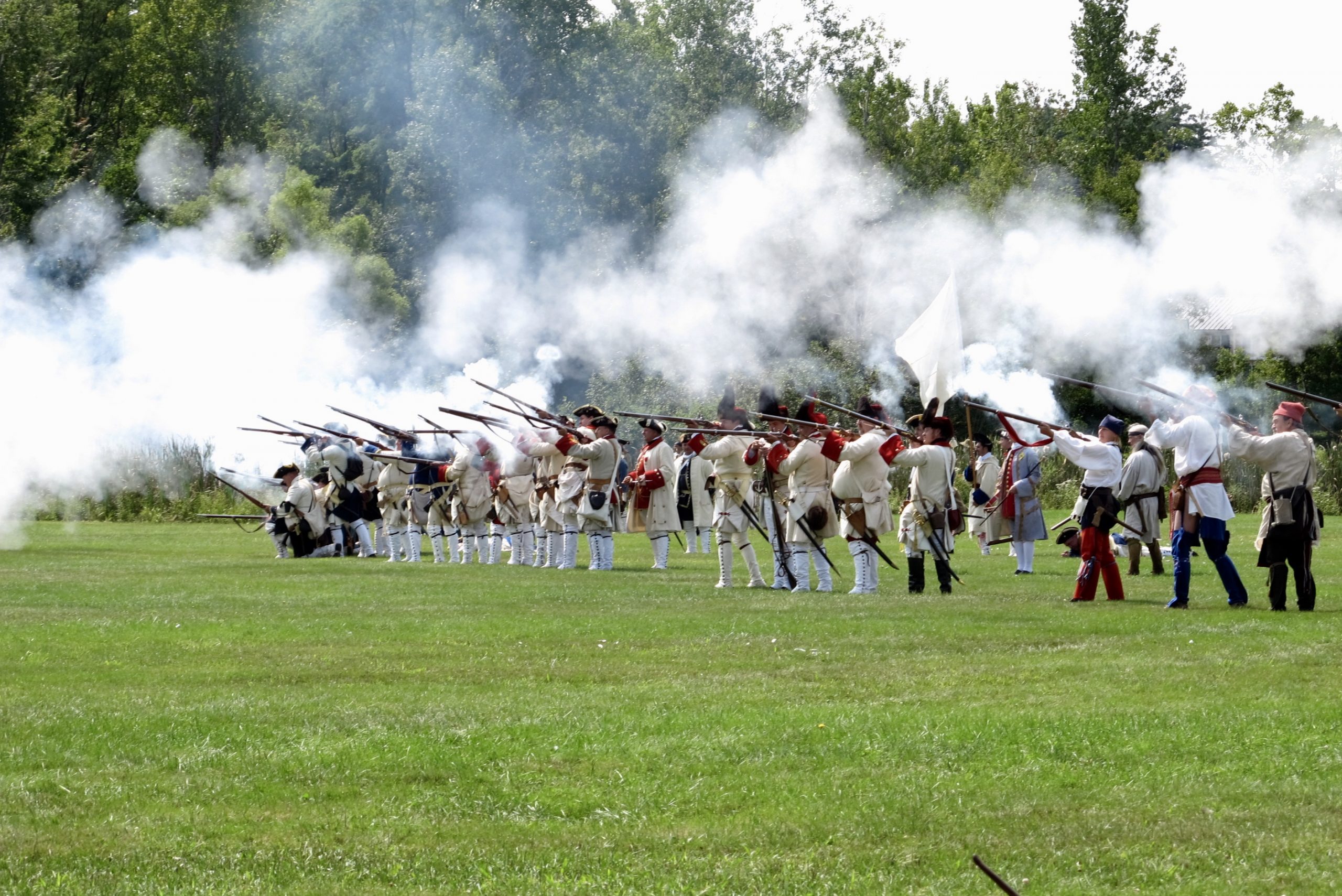 The French and Indian War (1755-1763) was the extension of the Seven Years War in Europe between England and France. It involved people on three continents and the Caribbean and is considered by many to the true first world war.

In 1750s, the area north of Albany was primarily a vast wilderness. The English built a large fortress at “The Great Carrying Place” on the Hudson River. This would become Fort Edward. When garrisoned, it would also become the third largest settlement in North America behind Philadelphia and New York. The French settled in territory north of the St. Lawrence River and into what would become western Pennsylvania and Ohio. Thus, the stage was set for these two great powers to clash over land, furs and trade in this northern territory. 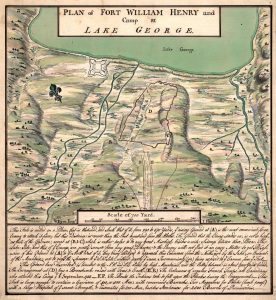 In 1755, the French traveled to the southern end of Lake Champlain and began work on Fort Carillon. In response, to protect their colonies, the English sent William Johnson to the south end of Lac du Saint Sacrament, which he renamed Lake George, and begins work on a fortification to be named Fort William Henry after two royal grandsons. This forward outpost would serve as a staging ground for attacks against French entrenchments and to protect the important inland waterways from New York City to Montreal. The design and construction were overseen by British military engineer William Eyre of 44th Foot. It followed the Vauban style made of log facings with an earthen filling making its walls 30 feet thick. It was surrounded on three sides by a dry moat and on the fourth was a hill sloping down to the lake. It could house 400-500 men. In addition, an entrenched camp was located to its east.

In July 1757 word came that the French were mobilized to attack the fort. Regulars and militia arrived bringing the total number of troops under the command of Lt. Col George Monro to about 2,300. The French forces under General Louis-Joseph de Montcalm arrived on August 3, 1757 setting up siege lines that surrounded the fort and cut off the military road to Fort Edward. Montcalm’s forces totaled over 3,000 French regulars, 3,000 militia, and approximately 2,000 Native Americans. Over the next few days, the French moved their heavy guns along trenches to within 150 yards of the northwest bastion and continually harassed the entrenched camp to the east. Meanwhile, many of the fort’s guns had exploded due to overuse. After six days and General Webb’s refusal to send re-enforcement from Fort Edward, Monro surrendered on August 9, 1757.

The terms of surrender were generous and allowed the British to return to Fort Edward with full honors war. Montcalm attempted to communicate these terms to his Native American allies but not all understood.   This was not a surprise since there were many different nations represented. In addition, the Native allies had been promised war booty as their payment for participating in the attack. Now it appeared that the French were not living up to their promises. As the British evacuated the fort, they entered the fort and plundered it, killing the sick and wounded left behind. The next morning, they renewed their harassment of the camp and as the troops and camp followers began the march to Fort Edward, the column was attacked. Estimates vary, but it appears that around 200 people were killed or wounded during the massacre that ensued. Some British broke ranks and ran into the woods to escape, others were stripped of their clothing and belongings and a few were taken prisoner by the Native Americans as they withdrew. Many of the survivors found their way to Fort Edward, days after the surrender. The siege had held up the French army for many days and had led to the Native allies and some militia abandoning Montcalm to return home. Not having the forces necessary to continue to Fort Edward, Montcalm took anything of value and burned the fort before returning to Fort Carillon.

Fort William Henry remained untouched until the 1950s when a group of local businessmen bought the land to protect the site from development. The site was excavated, and the fort reconstructed using the original plans and within its original footprint.